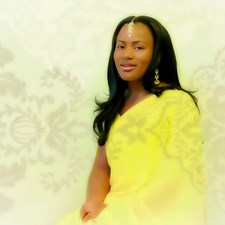 African artist: singer, song writer, dancer, choreographer and fashion designer, specializing in Bollywood music. She has 2 single video releases to her credit; "Hamesha Keliye" released in 2007 which earned her best artist for the first ever University of Buea Student Union (UBSU) talent competition in 2007 and a 3rd position on Africa Magic's top 5 Africa music rating in July 2008. Her second single is "I Will Never Say Goodbye (Mai Khabhi Alvida Nahin Kahungi)" released on youtube on the 13th of June 2016. Both videos were directed and choreographed by Meggy Jones. Also all the custumes of the I will never say goodbye video were made my Meggy Jones.

To know more about Meggy Jones