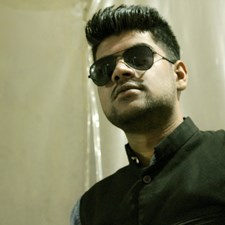 Aashish Kaushik (Born: 27th of July, 1994) is an Indian singer, lyricist, music-composer / music-director from Delhi, India, He was born in village 'khera khurd' in Delhi, his career began upon singing and featuring in a song 'Whisky' but he has been a great enthusiast of music and singing since childhood. He sings in hindi,haryanvi and punjabi.
Kaushik became more well-known with the release of his hit song 'One Piece' a punjabi song which he himself composed and sung as well. He also has appeared in 'Whisky' and 'Jutti yaara ki' haryanvi song.

MUSICAL CAREER
His musical career began upon singing with live performances at his local area & nearby area in delhi, he never refuse any opportunity for singing like; jagran, bhajan-kirtan programs or some colleges events in delhi, but he has been a great enthusiast of music and singing, he record his first song 'one piece' but after a lime-light beginning, he never look at back and sung many punjabi, haryanvi and hindi songs like; whisky, jutti yaara ki, chora jatt ka, doli v/s arthi, one piece, fan, judaaiyan, jean waliye, kudiyaan punjab diyaan, haryana, bhaj radhey govinda, kaisi bajaai tune baansuri, vrindavan jaaungi, yaad aayi, mauj fakira di & so on.

EARLIER LIFE
Aashish was born in Brahmin (Hindu) family to Sh. Jai Narain Kaushik and Savita Kaushik. His father is an Indian Army veteran and mother, a housewife.
He initiated his training in music from his school since his early childhood, He did his schooling from Delhi.
Though his family was reluctant initially for an un-traditional career in music but after witnessing his tremendous dedication and talent in music eventually they accepted that whole heartly.
He holds a graduation degree in IT (B.Sc.IT) and also a full term diploma in Software engineering.
But not following the conventional pathway in engineering he choose music over it and won hearts of his admirers.

To know more about Aashish Kaushik